I am Dr Jo Maher, I’ve been a GP at Wincobank Medical Centre for 17 years, initially as a salaried doctor and for the past 5 years as a partner of the practice. In addition I teach undergraduates at Sheffield Medical School & supervise junior doctors. I live with my partner Chris & our 3 boys aged 9,13 &15 years.

I’ve been in Sheffield since 1992 when I came as a student. I am the first woman in my family to go to Uni & the only Doctor. Sheffield is a bit like my home town of Bristol with a good music & a strong cultural scene. As I have found out in the past 9 years it’s also a great place to be active. 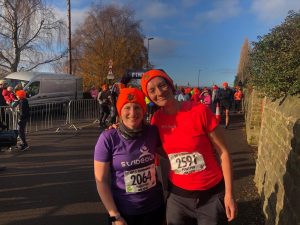 My Dad died in 2011 and I was very close to him. He used to cycle to work each day at Bristol University. Thinking about him & having young active 3 boys got me thinking, how am I going to keep myself fit as well as being a Mum & having a career? So I decided to start cycling to work, just like my dad had done for 40 years. I borrowed a Cycleboost (now called Pedalready) bike and managed my 5 mile commute once or twice a week.

I tried running for the first time using the NHS couch to 5k app in 2014 and it took me 18 months to get to the end of the 9 week program! I found it hard to motivate myself without the support of a group. I didn’t feel confident to go out with friends who already ran as I didn’t see myself as a runner then.

I only occasionally went running until 2017 when I took my boys to Graves Junior Park Run, after taking about it to one of my colleagues who said we should give it a try. I volunteered and really enjoyed watching the triumph the kids felt for taking part. I then tried Park Run myself and felt a great sense of achievement too.

In 2018, my partner Chris told me he was teaching someone I might have heard of, as she had strong links to the Wincobank community. Chris teaches Creative Writing at Hallam Uni & someone called Bridget Ingle was taking the MA course as she wanted to write her Dad- Brendan’s -memoir.

The Medical Centre was doing some work with Dementia UK to become the first GP surgery in Sheffield to be recognised as Dementia Friendly. I asked Chris if he would ask Bridget if it would be okay to pass on her email to me, as I wondered if she knew about what was happening in the area for people living with dementia… Little did I know where this would lead!

Happily Bridget said yes and we bounced emails backwards and forwards and realised we had similar ideas about the potential for improving what was available to people in the Wincobank area, not just for dementia but for physical activity generally. We met up for the first time in the autumn of 2018, just weeks after Brendan had died. Bridget & Tara had an idea to set up a women’s running group and asked me if I could support & take part.

I immediately said yes- I knew how hard it was to run on your own and find the confidence to take part in Park Run. I also plucked up the courage to join my mum friends, but was struggling to fit running into my schedule regularly.

For years I saw women and men come to me at the practice with health problems that I knew would improve with a chance to exercise. I also knew they were also struggling to juggle busy lives and look after themselves at the same time, just like me. It was great to talk about Ingle Runners and Concord ParkRun.

In 2018 Wincobank MC signed up to become a Parkrun practice and several of the nursing staff & doctors took part. I got to know Angela the Run Director at Concord. I now felt confident to describe myself as a runner and I wanted other people to feel the sense of achievement I feel. 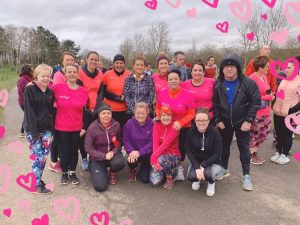 As a result of my involvement with Ingle Runners and Concord Parkrun I was asked this summer to take on a professional role for the Sheffield physical activity strategy, Move More.

Move More is about communities and involving the whole city in opportunities to be active. Meetings are held with council and hospital managers as well as community services. I believed I had something to offer from my personal as well as professional experience & to make sure what Bridget & Tara have shown me was shared with as many people as possible. I felt strongly that a female voice was needed, from someone who had seen the challenges that normal people face and learnt how these can be overcome.

In 2019 I completed my first race, the Round Sheffield Run & did my first 10k race in October, the TenTenTen. I also borrowed another bike from Pedalready, this time an electric one. After this I bought an e-bike and now cycle to work regularly. I’ve done 1,150miles on it since April! It’s a lot easier than a push bike, especially up big hills. I use it to get to and from work and sometimes use it for home visits.

Looking back I can’t believe how much my life has changed for the better since getting involved with biking and then running. It is the running that has given me most confidence & opened my eyes to what is possible when people work together. Both give me great satisfaction. I’ve met so many amazing people & feel so much more connected with the Wincobank community since becoming an Ingle Runner!